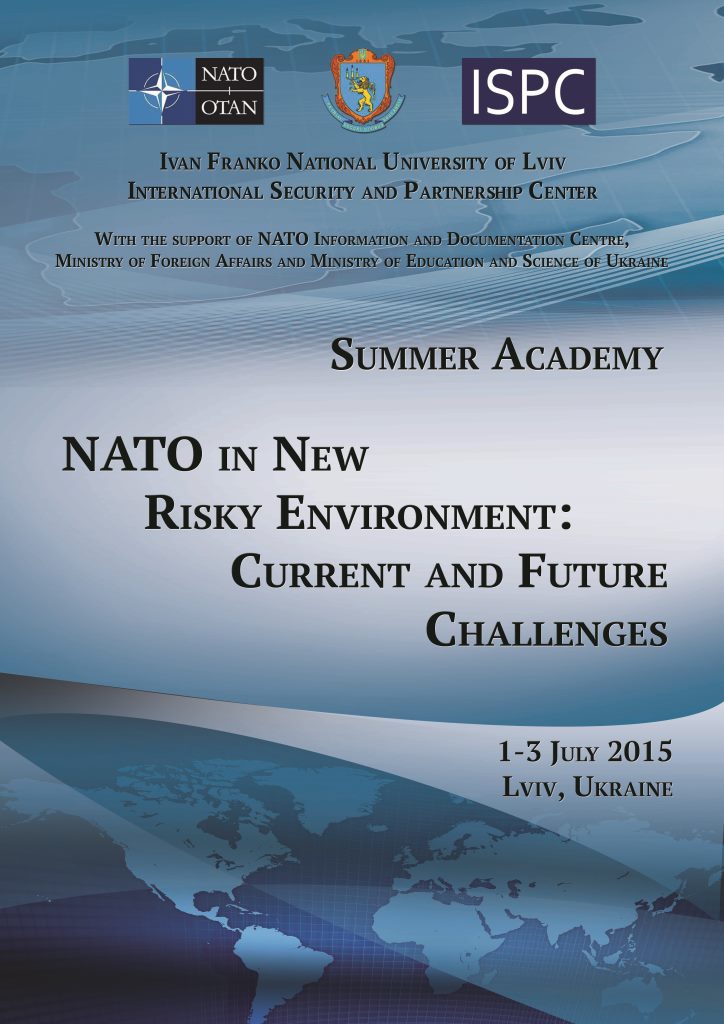 With the support of:
NATO Information and Documentation Center, Ukraine
Ministry of Foreign Affairs, Ministry of Education and Science, Ukraine

We are pleased to invite you to take part in the Summer Academy “NATO in New Risky Environment: Current and Future Challenges”.

The Summer Academy is an educational event aimed at eliciting and conceptualizing the evolving role of the North Atlantic Alliance in a newly formed risky environment of the globalized world.

NATO and the Euro-Atlantic region in general face the problem of dynamic structural changes of risks and challenges in global security. The experience of Ukraine demonstrates the acute need to find quick and effective response to the contemporary security threats. Today, more than ever, we are conscious of the need in: conceptual re-evaluation of new challenges in the global and regional security; adaptation of the Euro-Atlantic security structure, in particular NATO, as a key security institution; development of the quick response concept with the aim of prevention and resolution crises of different types as well as armed conflicts. The elaborated non-traditional methods of struggle, which include so called “Hybrid” warfare, use of irregular combat structures, terrorism, etc. point to the need of transformation of security thinking in political, military and civil circles.

The Academy is intended for undergraduate and graduate student from the top-ranking universities from Ukraine and other NATO member and non-member states. The program of the event includes expert and students discussions, live video conference with the NATO Headquarters in Brussels and Uppsala University, the Department of Peace and Conflict Research (Sweden). The organizers will also publish the presentations prior to the event and a simulation game.

The event is hosted by the Faculty of International Relations of Ivan Franko National University of Lviv.

SESSION 4. NATO as the “Security Umbrella” for Member and Non-member States

Debates of the Parties

ESSAY AND THE PRE-REGISTRATION FORM

Prospective participants should fill in a REGISTRATION FORM on http://academy.ispc.org.ua/registration/ and prepare a short essay (3-4 pages) in English on a subject related to the issues covered by the program of the Academy. 60 highly motivated participants will be selected for the event.  Selected essays will be published in a collection of reading materials prior to the Academy opening.

The working language of the Academy is English.

Travel expenses as well as lodging and catering will be covered by the Academy organizers.

More information can be found at: www.academy.ispc.org.ua